Wheels within Wheels: The History of Marvel Comics (Guest Post)

Hello everyone, I’m Chris Toomey.  I work with Nelson at Slalom and he has kindly let me borrow his blog for the day.  If you haven’t guessed already, this post is my entry into the Wiki Data Contest.

For those of you who don’t know (or maybe forgot) – every year Tableau hosts a series of themed competitions to select competitors to the Iron Viz Championship.  The first is all about finding data on Wikipedia and make a viz out of it.  I’ve been reading comics since I was 10 and thought it would be cool to chart the History of Marvel Comics. 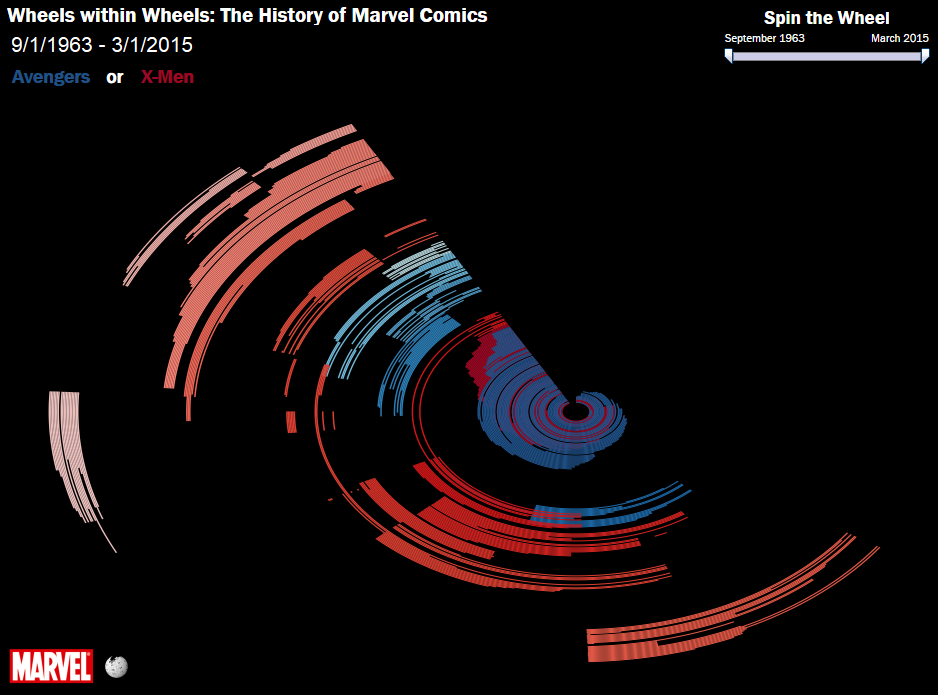 Go to the Viz on Tableau Public

In developing this viz, I came to appreciate how just how much Tableau’s technical depth supports the creative process.  There were many sources of inspiration, both technical and creative, and their work deserves mention.

Jonathan Hickman – Writer for the Avengers and mastermind behind Marvel’s upcoming “Secret Wars” event.  His visual style is fantastic, and his storytelling is even better.  A primary theme in his work is the notion of circularity – think concentric circles and time travel.  If you decide to open up his Avengers #1, this is one of the first things you will see: 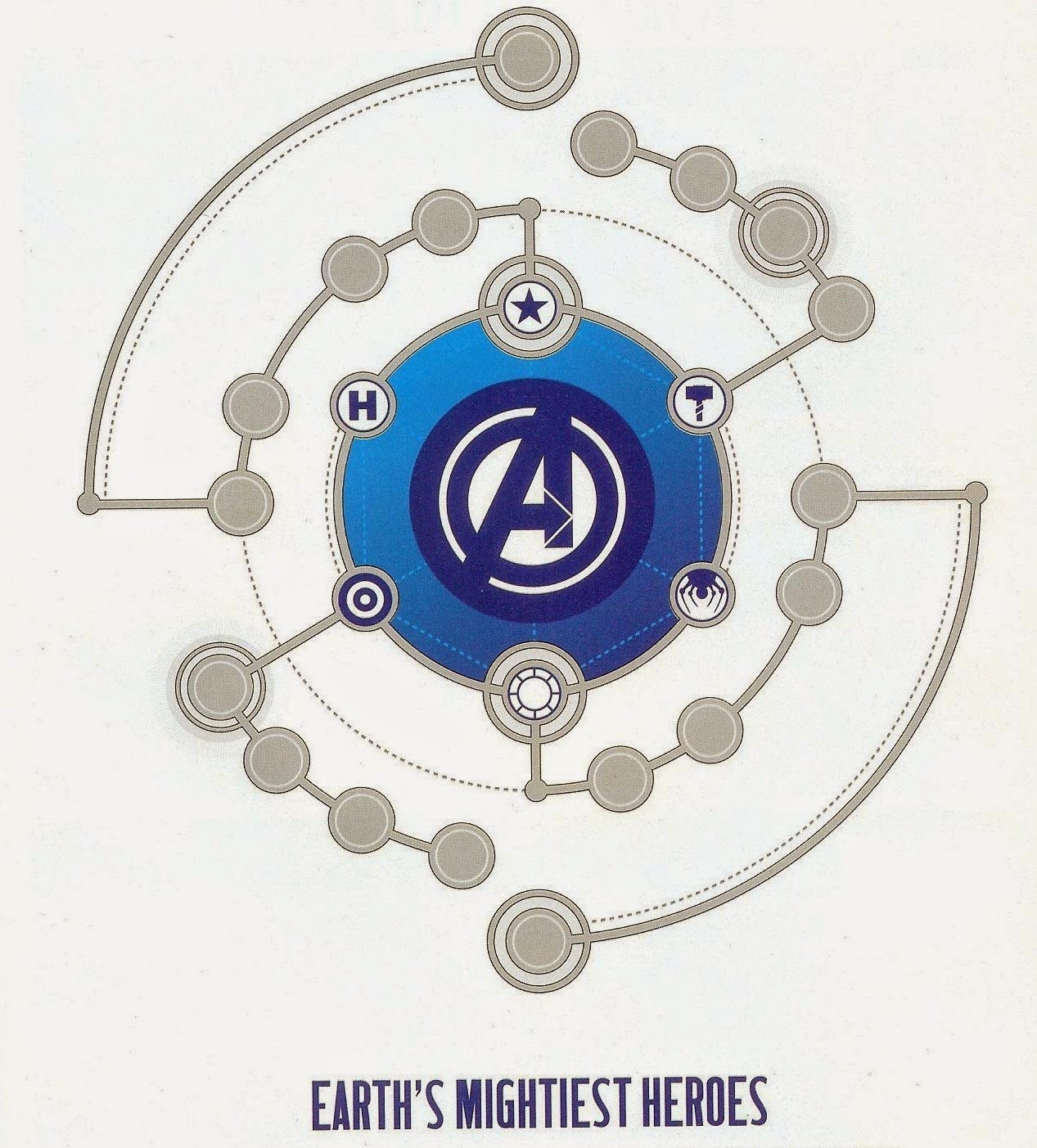 Jer Thorp – Co-founder of the Office for Creative Research, former NYU professor, and from 2010-2012, the Data Artist in Residence at the New York Times.  In 2012, he published a visual history of the Avengers, a selection of which can be seen below.  If you want to see master work in data visualization, read his stuff. 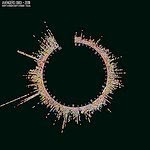 Bora Beran – Program Manager at Tableau, where he focuses on statistics and calculation features, query generation and technical partnerships.  Bora’s post on radial treemaps was what gave me the confidence that I could take what I’d seen in the work of Hickman and Thorp and translate it to Tableau.

There is also much more Marvel-related background, but you’ll need to explore the viz to find it!

While the specifics of the competition make it appear that you can simply CTRL-C + CTRL-V your way to a fabulous Wikipedia data set, the reality is much more cumbersome.  After working the design basics out in my handy notebook (paper still has its uses!), I knew exactly what kind of data I wanted.  This meant that I had to manually cut, paste, clean, and format the data.  It may not have been the most elegant solution, but it gave me the exact data structure that I needed to start.

Once I had all my data, it still needed some polish so I turned to Alteryx.  In Alteryx I was able to shape, sort, aggregate, join, and union my way to a Tableau-usable dataset, without the pain of doing it all in Excel.  In a few instances I needed subsets of the data to serve as inputs or lookups.  Instead of writing that data out once, and bringing it back in as a full input, I kept it all inside the tool (which is why you see two sets of text inputs).

Here’s how that trick works: insert a Browse tool into the workflow where you want to pull out data.  Once the workflow has run, open the Browse window and click the

icon in the top right and select “All Data with Headers.”  Then right-click anywhere in the workflow and select “Paste”.  The data will now be a Text Input and keeps everything self-contained.

I knew that circles were going to be the dominant part of my viz, so I needed to brush up on my trigonometry.  To do so I spent some time dissecting Steven Carter’s wonderful Adoption Gap visualization, and playing around on the Desmos Graphing Calculator.  Desmos is a wonderful tool for writing and comparing any type of function.  Simply start typing and it will do the equation formatting for you, hit Enter and you’ve got a graph.  Very handy for benchmarking equations, particularly SIN and COS.

Once I had my basic math down, I visited Bora Beran’s radial treemap post.  The third of his three examples shows a radial bar chart - which I knew was the basic model I wanted for my viz.
I first replicated his design using my data – his methods require using a data densification trick that relies on binning and unions.  It’s handy and got me most of the way there.  I just needed each bar (representing a character/team pair) to be offset by the number of months from time zero that they joined their respective team.  I’d like to say that I came up with a magic trig method to do this – but it simply came down to changing or adding one variable at a time and seeing what happened.  Desmos was particular helpful here as I could make multiple equations and compare then quickly.

Here’s the solution: Inside of the SIN/COS functions, I added the following:

DiffFromStart is a field I calculated in Alteryx that does a DateDiff from each characters JoinDate and the first date in the dataset.  I’m calculating it at the team+character level, SUM(DiffFromStart) is the same as the unaggregated value.  I wrapped it in a RUNNING_AVG to account for densification – I didn’t want that value to change just because Tableau created new points. Finally, the WINDOW_MAX represents the amount of the circle I’m actually playing with.  The result is that I can push the polygon around the circle and keep it aligned properly.

It is important to note that with the introduction of the “Spin the Wheel” filter, which operates before all the Table Calculations, this introduces some odd variations in arc length and position.  The values don’t change, but they move around in unexpected ways – which makes all the interactions all the more fun, you simply don’t know what’s coming!

The last thing I needed to do was finalize the formatting. A black background gives the colors the most pop, and I used Tableau 9’s handy hex color values to create consistent palettes.  The final piece was fonts – I spent so much time on the viz that I didn’t want to be undone by unreadable text.  Here’s the links to the best Tableau font resources I could find:
Fontlist
Tableau Public Font Best Practices

There are a number of other tricks to get the tooltips to function the way I wanted, but I’ll spare you the details and let you all pull things apart.

That’s it! Thanks to Nelson for loaning me his space, and thanks to you all for taking the time to read and interact with my work – I hope you enjoy using it as much as I enjoyed building it.
I’m active on Twitter, but the link to my LinkedIn page is on my Tableau Public profile – so feel free to reach out with comments, questions, or if you just want to talk comics.  I’m also at all the Seattle Tableau User Group events, and will be at TC15 in October.